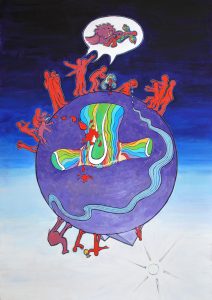 Disrupting audience expectations has become a staple of modern art.  As art seeks to challenge the viewer, the art world becomes an insiders club with some people in the know and some who are mystified by the museum experience.  We fear getting it wrong and revealing our ignorance. This culture of esoteric art knowledge is a barrier that shuts down our ability to perceive.  It also encourages overreliance on interpretation of works of art.

The antidote to this insiders club is to make ones eyes the primary entry point to a work of visual art.   Look carefully and see what you notice.  Explore the composition.  Examine the elements of color, shape, line, and texture.   Does the work intrigue you?   If the answer to that question is “not much”, or “the museum tag made it sound really interesting” then perhaps the emperor has no clothes.  On the other hand if you find the work captures your eyes and bears repeated attention then you have found something of value.

As an artist presenting my work, I hesitate to tell what I intended.  Presumably my words about this work carry more weight than any other viewer of the painting.  However, I think that if you the reader of this essay rushes ahead to read my interpretation, you will have missed a chance to encounter the work free of my opinions.  You will miss the joy of making discoveries for yourself.   A written essay explaining the meaning of a work becomes a trap in that we can obtain the message of a visual work without looking for ourselves or delving deeply into what might be waiting for us.  When we rely heavily on written interpretations, the meaning becomes fixed to the words rather than the visual presence of the work.  So you have been warned! Spoiler alert! Read no further until you have taken time to look at the painting that is the subject of this essay.   Do not just give a cursory glance.  Take time and form your own opinions.  Once you have done that, read on and compare your conclusions to my own.

When I have shown people this painting without explanation, I have found that many are unable to identify the subject matter.  I am sure people feel nervous when they are put on the spot.  The inability to identify the subject may stem from unfamiliarity with biblical stories.   Some people may be unsure where to start and feel that artwork is the realm of professionals.

I don’t think that slow recognition makes this a bad painting.  The story this painting depicts encourages the reader to question the ability of men to see God’s plan clearly, so a painting that slowly reveals itself can emphasize that point.    My painting strays from many of the conventions of Christian art.   Older traditions used halos to show the audience the subject matter is saintly.  Lately biblical illustrators signal the audience with a robe and sandal style of depiction.   My style is cartoonish, but with a little too much blood and sorrow to be a work targeted at children.  It is not really a style that is associated with biblical subject matter.  I try to show as many elements of the story as will fit in the frame.  I will often omit the facial features because I think specific facial features can put distance between the artwork and audience, while the converse allows audience inhabit the work by filling in the blank with their own specifics.  I do try to use the gesture of the figures to convey the story and feeling of the characters.

The subject of this painting is drawn from Genesis 37:17-36. The author the story of Joseph tells a story of rivalry, betrayal, lies, complicity, lust, sorrow redemption and more.  Though it all, the central message is that Joseph’s seeming misfortune is turned to blessing.  For Joseph’s brothers, the ill advised attempt to be rid of Joseph does not liberate them from his domination.  Ironically their actions put him in a position to lord over them as well as to save them.

In my painting of Joseph being sold, I tried to paint the scene in a way that emphasized these elements of human weakness and strength.   One can see Joseph’s brothers in an impassioned conversation with their father at the top of the painting.  The brother’s word balloon is filled with an image rather than text.  The brothers are telling their father that Joseph was killed by a lion.   Joseph’s father, Israel, is grieving a river of tears that wind around the world.   The coat of many colors dominates the center of the painting.  We also see the brothers splattering the coat with the blood of a sacrificial lamb.  The coat’s central location emphasizes how Joseph has been stripped of a symbol of his father’s favor.  It also is a reminder of the lie the  brothers used to convince their father that Joseph had died in a lion attack.  On the other side of the globe, Joseph is shown in egypt being sold to his new master.   The globe is used here as a symbol of distance, not only physical but also spiritual and emotional distance.  In contrast to convention, the moon dominates the upper left and the sun illuminates the lower right.  The unconventional position of the sun and moon highlight God’s favor on Joseph and the problematic actions of the brothers.

Having shared my perspective on this work, I would hope that rather than becoming the source of your understanding, this essay is a chance to reflect on your experience of the painting.  You have already reached your own conclusions prior to reading my opinions.  So now you might want to look back at the work again as if you are looking at it with me.  You may say to yourself, “Yeah, I noticed that!” or “Oh my gosh, I see that”.   Or perhaps you may even have other insights that go beyond the limits of the essay.

As you encounter works in the future, I would encourage you to look deeply at the work and imagine what caused the artist to create such a work.   Then after you have had a chance to take it in and form an opinion, look at the museum tag, listen to the museum’s headphones or read the catalogue entry.