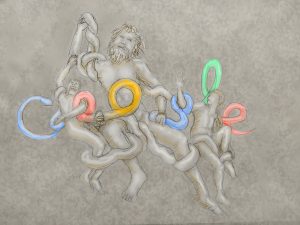 The pandemic lockdown of 2020 pulled me out of my routine and canceled my commute.  I used the extra time to make art.  I chose to focus on a central intersection located between our local university and the seat of government.  I sketched there over 30 times between November of 2020 and May of 2021.  Each time I went back, I found a new point of view.  This was an eventful time in our city.  The result of the presidential election was determined, my sketches document murals which were put up in the wake of George Floyd’s murder.  I participated in and sketched a protest to ‘Stop Asian Hate’.  It felt like composing a love letter to my hometown.

This art was meaningful to those who knew this place well and endured this time together.  These multiple crises were challenging our community to imagine how we might emerge transformed and stronger than before.  I compiled the art into a book that could stimulate contemplation on what had happened.  I took several steps to keep this a local project.  I hired poets and writers who had connections to the place to provide texts with diverse perspectives.  I established my own publishing company.  I used a local printer and promoted the book locally.  In protest against Amazon, my slogan was: “When online booksellers launch themselves into space it is time to buy local.”  The book was well received by the local media.

As I worked to reach audiences, I contemplated using Google and Facebook to advertise.  I had been an early adopter of their services.  I have had Gmail and Facebook accounts since the 1990’s.  The free services are seductive, and initially I gave little thought as to how they come at no charge.  Some years later I read essays describing our data as the commodity and that we are the product being sold.  It made sense but it seemed harmless.  My data was probably anonymized and it was of no particular value to me.  It seemed OK to trade that for useful services, even if the ads I was being fed seemed stalkerish.  The 2016 election caused me to reevaluate.  Facebook played a large role in spreading falsehood.  There was no transparency in terms of who was broadcasting which messages.  The fact that each media consumer lives in a separate media bubble made it difficult to see the content of these messaging campaigns.  The evidence pointed to Russian campaigns targeting American voters to influence the election.  I felt angry and helpless.  Despite these reservations, now I was in a position to purchase what Google sells.

I was torn by the idea of injecting multinational companies into my local project.  My encounter with Google did not go well.  My first contact was a video meeting with a Google representative based in Atlanta, GA.  He did not seem to understand my book well, but he urged me to advertise with Google with promises of great success.  I had a second video chat with a technical support person in Bangalore, India.  My third video conference was with a representative in the Philippines.  The main selling point was Google’s AI, which would  track down people interested in my book.  This third meeting was intended to seal the deal on an advertising contract, but did little to assuage my doubts.  Not surprisingly, this person half a world away had little understanding of what I was trying to sell or why people might be interested.  I was also turned off by the fact that 2 of the 3 meetings were located in countries with low wage economies.  Perhaps I should have been grateful that a multinational could bring me talent at low cost from around the world.  In my mind I saw money being mined from our local economy by people who have no business coming between me and my local audience.

For now, art is still not easy for AI to understand.  Perhaps at some point in the future, AI will have no trouble parsing the artist’s message.  I hope art will remain a human endeavor.  As for marketing, I will look for alternatives.  I am not sure if my method is sustainable or will make a difference in the long run, but I would like to imagine ways to do business that do not involve feeding large conglomerates.  The price of “free” can be costly.